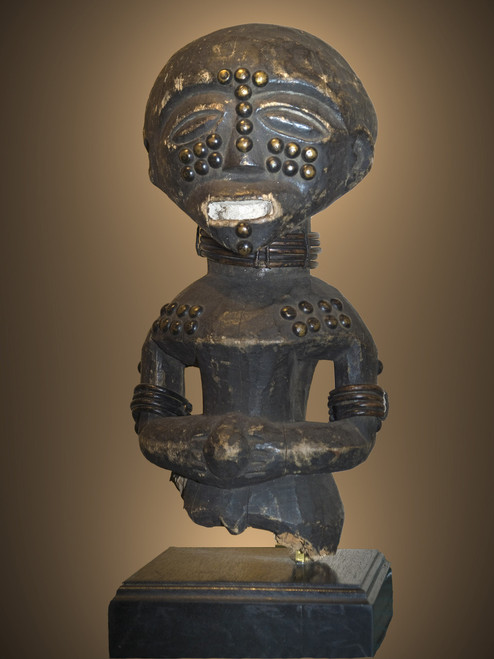 The Luba and Songye ethnic groups are related to common ancestors.The founder of the Luba Empire in the sixteenth century, King N'konglo was a Songye. They number over 950,000, and occupy a vast territory of southeastern Democratic Republic of the Congo (DRC). In the historic kingdoms of Central Africa, specifically DRC, including those of the Luba and Songye, sculptures, stools, and ivory bracelets were emblems of divine Kingship. Their rich symbolism embodied powerful references to rulership, and because of that, they were used only by royalties. Luba art varies from region to region, and has influenced the art of neighboring peoples including the Tabwa, Boyo, Hemba, and Chokwe. This magnificent figure shown here, adorned wih strands of brass around the neck and on both arms, suggests a true Luba King. Kept in huts solely to maintain its protection, the appearance of aged patina of this ancestor figure, with the poetic fragmentation to the lower portions attests to its years of veneration within the high ranks of Luba culture.