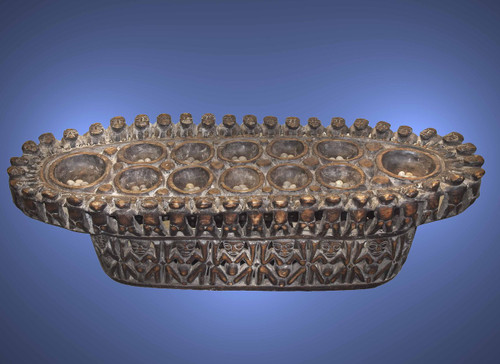 The Akan, (predominat ethnic group in Ghana) "term Oware", was acquired from the famous King of the Ashanti Kingdom called Opoku Ware 1 (1700-1750). The King usually used this game to settle dispute between married couples, particularly when they were at the verge of separation. This would happen after the King and his elders had managed to settle the case and would charge the couple to sit down together and entertain themselves with this game. The servants in the king's palace would be singing songs whilst the game was in progress. In the end, the Ashanti realized that the king deserved an honor for using this game to resolve family disputes. Hence, the "O" was taken to preceed the "ware" to form "Oware". Ware in Akan (Ashanti) means "marry." This massive and rare Oware Game Board was originally handcrafted in Cameroon, by a renowned Bamileke craftman for Bamileke royal family. Around the game board are 48 human-face motifs, and on each side of the board are 8 human-face motifs, intricately handcarved. The motifs are presumed to be ancestral royal figures protecting the royal family. This rare and beautiful Game Board is not what you see on the market. It was handcrafted for the Bamileke Royal Household, with 48 grey/green organic seeds, from African Odum tree.