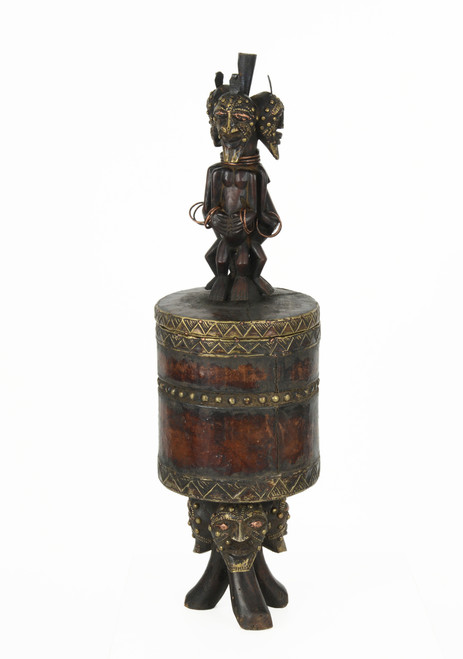 Rising from three identical figures decorated with brass and studs inlaid on wood on their faces, with pointed chin, legs outstretched, the circular pot is also completely inlaid with a sheet of brass, several studs of copper in a circular procession over wood; inside of pot showing obvious sign of age due to usage.

On the lid of the pot stands uprightly a male and obvious two pregnant female figures, hands rested on their bellies, two sets of copper rings rested on each arm, and adorning four copper necklace around the neck. Several copper studs on their faces, partially oily patina with oxidation on the copper parts around the eyes. Three flat metals carefully inserted in front of the heads, with a funnel-like metal also inserted in the middle of the top of the three figures.

This magnificent and rare pot was used to store herbal medicine to cure illness, and also in the context of divinatory rites. The six figures at the bottom of the pot and the top of the lid are presumed to be spiritual guardians protecting the medicinal content in the pot, and also represent the spirits that possessed the diviner, and to whom were attributed curative powers.